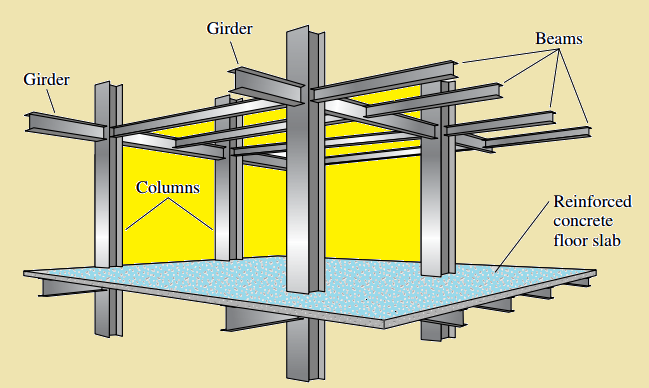 In order to perform the process of structural design, one has to go through the structural analysis. The analysis includes a main step which is “Structural Idealization”

To calculate the forces in the various parts of a structure with reasonable simplicity and accuracy, it is necessary to represent the structure in a simple manner that is conducive to analysis. Structural components have width and thickness. Concentrated forces rarely act at a single point; rather, they are distributed over small areas. If these characteristics are taken into consideration in detail, however, an analysis of the structure will be very difficult, if not impossible to perform.

The process of replacing an actual structure with a simple system conducive to analysis is called structural idealization. Most often, lines that are located along the centerlines of the components represent the structural components. The sketch of a structure idealized in this manner usually is called a line diagram.

The preparation of line diagrams is shown in Figure 1. The wood beam shown supports several floor joists and in turn is supported by three concrete block walls. The actual distribution of the forces acting on the beam is also shown. For purposes of analysis, though, we can conservatively represent the beam and its loads and reactions with the line diagram. The loaded spans are longer with the result that shears and moments are higher than actually occur.

Sometimes the idealization of a structure involves assumptions about the behavior of the structure. As an example, the bolted steel roof truss of Figure 2 is considered. The joints in trusses often are made with large connection or gusset plates and, as such, can transfer moments to the ends of the members. However, experience has shown that the stresses caused by the axial forces in the members greatly exceed the stresses caused by flexural forces. As a result, for purposes of analysis we can assume that the truss consists of a set of pin-connected lines.

Although the use of simple line diagrams for analyzing structures will not result in perfect analyses, the results usually are quite acceptable. Sometimes, though, there may be some doubt in the mind of the analyst as to the exact line diagram or model to be used for analyzing a particular structure. For instance, should beam lengths be clear spans between supports, or should they equal the distances center to center of those supports? Should it be assumed that the supports are free to rotate under loads, are fixed against
rotation, or do they fall somewhere in between? Because of many questions such as these, it may be necessary to consider different models and perform the analysis for each one to determine the worst cases.