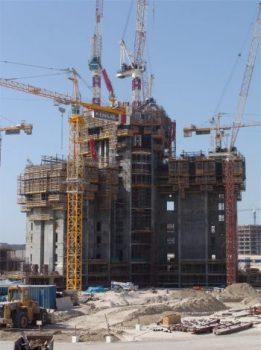 Concrete itself is a mixture of aggregates held together in a rocklike mass with a paste of cement and water. Concrete is characterized by its high compressive strength and on contrast, a very low tensile strength.

Reinforced concrete combines both concrete and steel where the steel bars compensates the tensile strength lacking in the concrete. Noting that steel bars are also capable of resisting compression forces and are used in columns as well as in other situations. 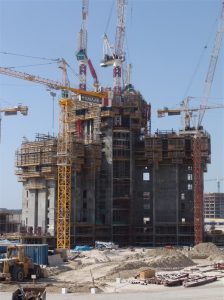 2- Advantages of RC as a Structural Material

RC may be the most widely used material available for construction. It is used in great or small—buildings, bridges, pavements, dams, retaining walls, tunnels, drainage and irrigation facilities, tanks, and so on. This extensive use of RC is attributed to its numerous advantages includin the following:

1.Considerable compressive strength per unit cost compared with most other materials.

3. Reinforced concrete has great resistance to the actions of fire and water. During fires of average intensity, members with a satisfactory cover of concrete over the reinforcing bars suffer only surface damage without failure.

4. It is made of inexpensive local materials (sand, gravel, and water) and requires relatively small amounts of cement and reinforcing steel. Moreover, a low-maintenance material.

5. It has a very long service life compared to other materials,. Under proper conditions, RC structures can be used indefinitely without reduction of their load-carrying abilities. This can be explained by the fact that the strength of concrete does not decrease with time but actually increases over a very long duration because of the lengthy process of the solidification of the cement paste.

6. It is usually the only economical material available for footings, floor slabs, basement
walls, piers, and similar applications.

7. A special feature of concrete is its ability to be cast into an extraordinary variety of
shapes from simple slabs, beams, and columns to great arches and shells.

8. RC erection requires lower grade of skilled labor as compared with other materials such as structural steel.

1.3 Drawbacks of RC as a Structural Material

The designer must be completely aware of RC’s weak points in addition to its strong ones to apply it in a successful way. Among its disadvantages are the following:

1. Concrete has a very low tensile strength, requiring the use of tensile reinforcing.

2. Forms are required to hold the concrete in place until it hardens sufficiently to support themselves. Formwork sometimes can be very expensive. In USA, its costs run from one-third to two-thirds of the total cost of a RC structure, with average values of about 50%. Thus, to reduce the overall cost, the major emphasis is on reducing formwork costs

5. The properties of concrete vary widely because of variations in its proportioning and mixing. Furthermore, the placing and curing of concrete is not as carefully controlled as is the production of other materials, such as structural steel and laminated wood. Two other characteristics that can cause problems are concrete’s shrinkage and creep.