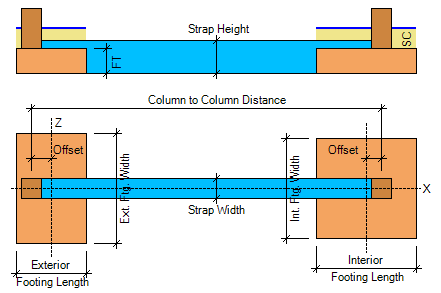 Foundation is a structural part of a building on which a building stands. Foundation transmits and distributes its own load and imposed loads to the soil in such a way that the load bearing capacity of the foundation bed is not exceeded.

The solid ground on which the foundation rests, is called foundation bed. There are various types of foundation. They can be categorised into two types.

Shallow foundation itself can be various types.

This type of footing can be two types –

These are most economical. They are usually in square or rectangle size with the column sitting in the middle of the square. It’s a kind of pad footing.

A footing, either rectangular or trapezoidal, that supports two columns. It’s also a pad footing.

Consist of two single footings connected with a beam or a strap and support two single columns.

Consist of one footing usually placed under the entire building area. They are used when soil bearing capacity is low, column loads are heavy, single footing can’t be used, piles are not used and differential settlement must be reduced.

Wall footings are used to distribute the loads of structural load-bearing walls to the soil.

Deep foundations are those founding too deeply below the finished ground surface for their base bearing capacity to be affected by surface conditions, this is usually at depths of 3 meter below finished ground level. Deep foundations can be used to transfer the load to a deeper, more competent strata at depth if unsuitable soils are present near the surface.

Pile foundations are common type of deep foundation. These are relatively long, slender members that transmit foundation loads through soil strata of low bearing capacity to deeper soil or rock strata having a high bearing capacity. They are used when for economic, constructional or soil condition considerations it is desirable to transmit loads to strata beyond the practical reach of shallow foundations.

In addition to supporting structures, piles are also used to anchor structures against uplift forces and to assist structures in resisting lateral and overturning forces.

Thick slabs are used to tie a group of piles together to support and transmit column loads to the piles.