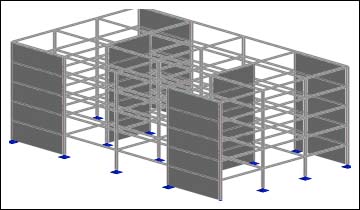 Shear walls are the vertical structural element which resist the horizontal forces acting on a building structure. Shear wall can also be defined as a wall which are reinforced & made of braced panels to carry lateral forces. The thickness of the shear wall for regular buildings can be generally in the range of 150 mm to 400 mm.

Shear Wall in a Building

The main functions of a Shear Wall can be described as follows :

The various walls and co-existing frames in a building are linked at the different floor levels by means of the floor system, which distributes the lateral loads to these different systems appropriately. The interaction between the shear walls and the frames is structurally advantageous in that the walls restrain the frame deformations in the lower storey, while frame restrain the wall deformations in the upper storey. Frame-shear wall systems are generally considered in buildings up to about 40 storeys.

The load attracted to each component is a function of position and relative stiffness. Compared to cantilever shear walls, stiff frames and short shear walls when subjected to horizontal load deform with a pure shear behavior, with a concave shape in the upper region and convex in lower region. Whereas cantilever shear walls has a flexural behavior, the deflection is convex like a BMD of a cantilever beam, throughout the height of the wall.

Deformation in building with shear wall

Since cross walls are provided, the wall is braced.

For the axial load & moment , RCC Wall is designed similar to a RCC Column subjected to axial load & uniaxial moment.

Since Vertical Reinforcement is less than 2 %, no horizontal links are required.