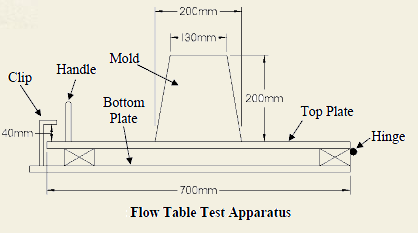 This test was covered by BS 1881 : 105 : 1984. The test is appropriate for concrete of high and very high workability, including flowing concrete which would exhibit a collapse slump.

The apparatus consists essentially of a wooden board covered by a steel plate with a total mass of 16 kg. This board is hinged along one side to a base board, each board being 700 mm square. The upper board can be lifted up to a stop so that the free edge rises 40 mm. Appropriate markings indicate the location of the concrete to be deposited on the table.

The table top is moistened and a frustum of a cone of concrete, lightly tamped by a wooden tamper in a prescribed manner, is placed using a mould 200 mm high with a bottom diameter of 200 mm and a top diameter of 130 mm. Excess concrete is removed, the surrounding table top is cleaned and, after an interval of 30 seconds, the table top is lifted 15 times in a period of 45 to 75 seconds, this motion avoiding a significant force against the stop. In consequence, the concrete spreads and the maximum spread parallel to the two edges of the table is measured. The average of these two values, given to the nearest millimetre, represents the flow. The test is appropriate for mixes having a flow of 340 to 600 mm. If the concrete at this stage does not appear uniform and cohesive, this is an indication of a lack of cohesiveness of the mix. The current standard is BS EN 12350-5 : 2010.

A laboratory investigation has shown a linear relation between flow and slump, but the tests were limited in scope in that they involved only one aggregate type and only one aggregate grading. Also, the effect of site conditions was not included. In consequence, no generalization can be inferred from the data which were published, and it would be unwise to view the slump test and the flow test as generally interchangeable. In essence, the two tests do not measure the same physical phenomena so that there is no reason to expect a single relationship between the two when grading or aggregate shape or content of fine material in the mix vary. For practical purposes, an appropriate test should be adopted. Such a test makes it possible to recognize a departure from the specified mix proportions, and this is what matters on site.