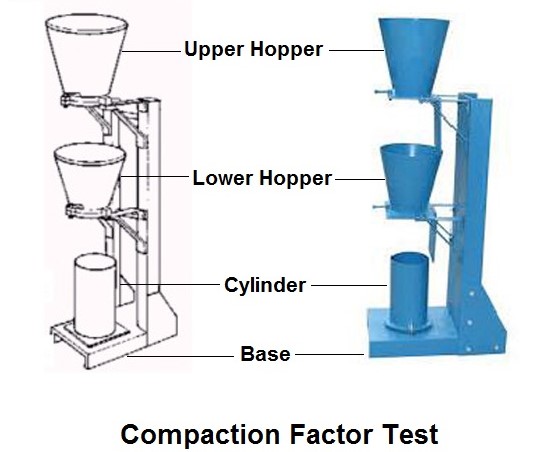 There is no generally accepted method of directly measuring the amount of work necessary to achieve full compaction, which is a definition of workability. Probably the best test yet available uses the inverse approach: the degree of compaction achieved by a standard amount of work is determined.

The work applied includes perforce the work done against the surface friction but this is reduced to a minimum, although probably the actual friction varies with the workability of the mix.

The degree of compaction, called the compacting factor, is measured by the density ratio, i.e. the ratio of the density actually achieved in the test to the density of the same concrete fully compacted.

The apparatus consists essentially of two hoppers, each in the shape of a frustum of a cone, and one cylinder, the three being above one another. The hoppers have hinged doors at the bottom, as shown in Fig. 1. All inside surfaces are polished to reduce friction.

The density of the concrete in the cylinder is now calculated, and this density divided by the density of the fully compacted concrete is defined as the compacting factor. The latter density can be obtained by actually filling the cylinder with concrete in four layers, each tamped or vibrated, or alternatively calculated from the absolute volumes of the mix ingredients. The compacting factor can also be calculated from the reduction in volume that occurs when a defined volume of partially compacted concrete (by passing through the hoppers) is fully compacted.

The compacting factor apparatus shown in Fig. 1 is about 1.2 m high and its use is generally limited to pavement construction and precast concrete manufacture.

Leaner mixes need more work than richer ones. This means that the implied assumption that all mixes with the same compacting factor require the same amount of useful work is not always justified. Likewise, the assumption, mentioned earlier, that the wasted work represents a constant proportion of the total work done regardless of the properties of the mix is not quite correct. Nevertheless, the compacting factor test undoubtedly provides a good measure of workability.