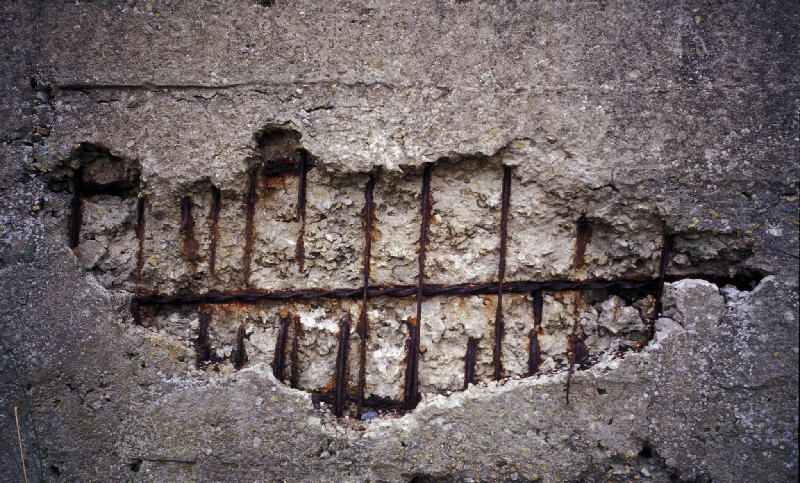 In 1982, Tuutti proposed that deterioration due to steel reinforcement corrosion can be represented by a two stage model (Figure 1).

The first stage is associated with corrosion initiation, in which detrimental substances (such as chlorides) penetrate through concrete until reaching steel surface in sufficient quantity to initiate corrosion (depassivation). The length of this stage, Ti, is estimated as the time elapsed from construction until depassivation.

Corrosion propagation, the second stage, starts from the time of depassivation until an unacceptable corrosion damage “limit state” occurs. Limit states may be defined as corrosion initiation, cracking through the concrete cover, spalling, or ultimate failure.

Propagation period, Tp starts from the time of depassivation until reaching a certain limit state. The sum of Ti and Tp can be considered as the service life of RC structure where corrosion is likely the deterioration mechanism.  If the final limit state is considered to be the corrosion initiation, Tp will equal to zero

It is important to mention here that the length of the corrosion propagation stage in concrete is found to be relatively short, typically a few years. As a result, much of the emphasis on achieving long service life is put on achieving a long corrosion initiation stage. Confirming this, Life-365 service life prediction software, developed by the Life-365 Consortium which consists of BASF Admixture Systems, Cortec, Epoxy Interest Group, Euclid Chemical, Grace Construction Products, National Ready-mixed Concrete Association, Sika Corporation, Silica Fume Association, and Slag Cement Association, assumes the propagation period to be fixed at 6 years.