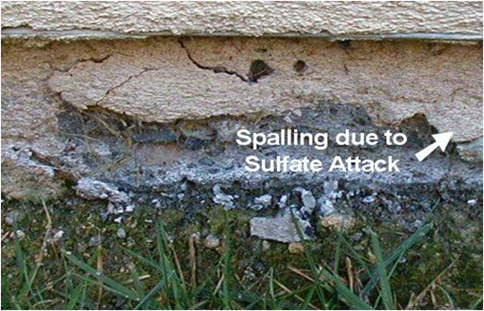 Sulfate compounds (such as calcium sulfate, sodium sulfate, and magnesium sulfate) which exist in seawater, ground water, sewers, soil or even in the concrete materials themselves can attack and significantly damage the concrete. There are two types of  sulfate attack, namely: chemical (involving chemical interaction between sulfates and concrete compounds) and physical (sulfate salt crystallize inside the concrete pores to cause internal pressure on concrete). In this article, only the chemical sulfate attack will be covered. Regarding, the physical one will be covered in a following article. From now on, the term “sulfate attack” would refer to the chemical type.

As mentioned before, sulfates react with hydrated compounds in the hardened cement paste. These reactions might induce sufficient internal pressure resulting in expansion, spalling of surface layers, loss of strength and ultimately total disintegration of concrete.