Failure of formwork in general results from various causes: excessive loads, premature removal of forms or shores, inadequacies related to formwork, and human error on the job, whether due to indifference, haste, or lack of knowledge. Hadipnono and Wang (1986) studied the causes of 85 major falsework failures that have been documented over the past 23 years. Three causes of failure were identified: enabling, triggering, and procedural causes (Table 1).

According to the type of collapse, almost half of the building falsework failures were due to deficiencies in vertical shores (Fig. 1). Figure 2 shows that concrete placing, and falsework and formwork removals are two critical stages of operation. One out of two falsework collapses occurred during concrete casting. In many cases, the excessive rate of pouring and the direct vibration to form ties led to vertical formwork failures. As a result of vertical formwork bursting in multistory buildings, the additional loads imposed by the fallen debris triggered a collapse in the level below. In other cases, the accident caused by impact of powered equipment, such as motorized buggies, imposed additional loads on falsework and led to falsework collapses. Falsework or formwork removal is the other critical operation stage, about 12% of falsework failures occurred as a result of improper reshoring, and premature falsework or formwork removal. 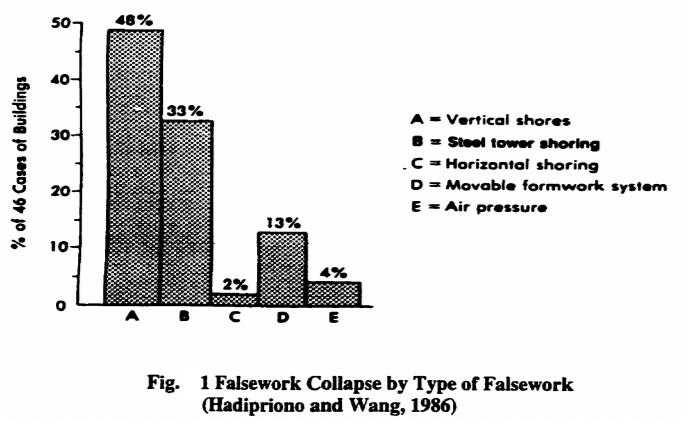 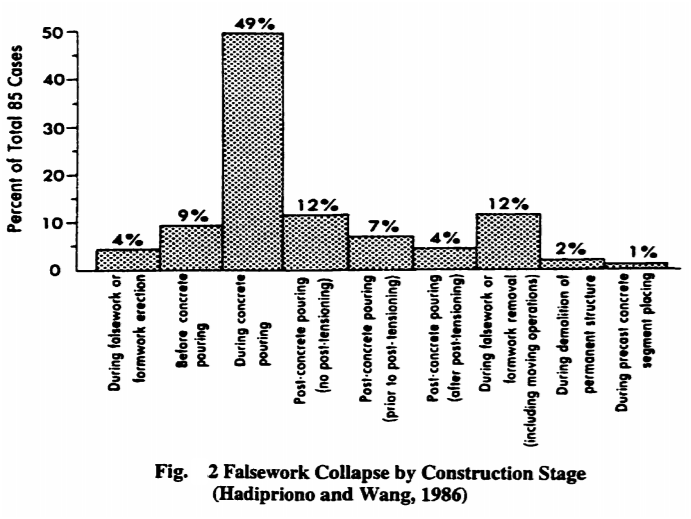