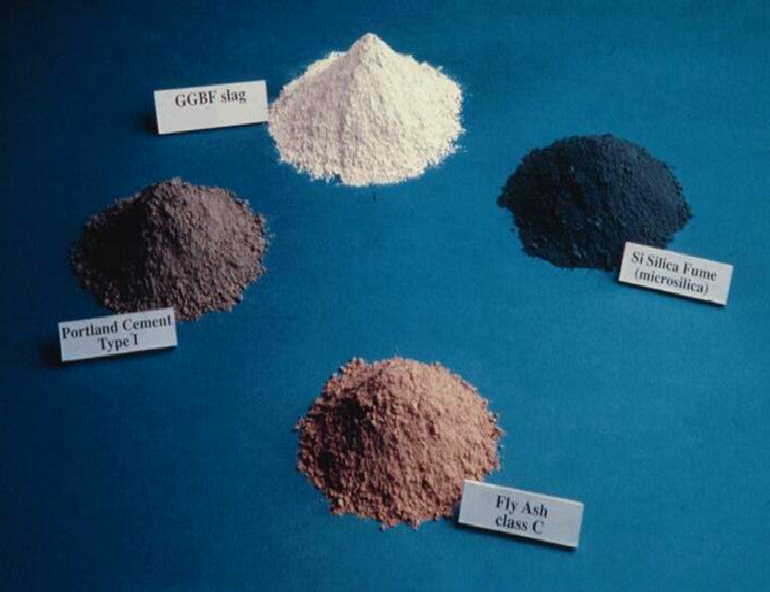 The term supplementary cementing materials (SCMs) -sometimes called “mineral admixtures”- refers to a broad range of materials that are widely used in concrete in addition to portland cement. An SCM may be defined as “a material that, when used in conjunction with portland cement, contributes to the properties of the hardened concrete through hydraulic or pozzolanic activity, or both”. Thus, SCMs include both pozzolans and hydraulic materials. SCMs that are commonly used in concrete today include ﬂy ash, ground granulated blast furnace slag, silica fume, and a wide range of natural pozzolans, such as volcanic ash, calcined clay or shale, and diatomaceous earth.

A pozzolan is defned as “a siliceous or siliceous and aluminous material that in itself possesses little or no cementitious value but that will, in fnely divided form and in the presence of moisture, chemically react with calcium hydroxide (a hydration product of portland cement) at ordinary temperatures to form compounds having cementitious properties”. Pozzolans that are commonly used in concrete include ﬂy ash, silica fume, and a variety of natural pozzolans, such as calcined clay and shale, and volcanic ash. Some SCMs, such as ground granulated blast furnace slag, show hydraulic behavior in that they react with water directly to form hydration products with cementitious properties. Such materials do not require portland cement to harden and gain strength, but the chemical reactions are greatly accelerated by the presence of portland cement, and thus materials such as slag are most often used in combination with portland cement. Some materials, such as ﬂy ashes that contain a high amount of calcium (Class C ﬂy ashes) will react both pozzolanically and hydraulically when used in concrete.

Supplementary Cementing Materials undergo chemical reactions in concrete, and the products of reaction are cementitious in nature; that is, the products help bind the components of the concrete together in the same manner as the reaction (or hydration) products of portland cement. Consequently, SCMs are considered to be part of the cementing material component of the concrete, and they should be included in the calculation of the water-to-cementing materials ratio, W/CM, of the concrete. As such, SCMs should be differentiated from fnely divided mineral fllers, such as ground limestone or quartz, which are generally chemically inert in concrete and are not considered to be part of the cementing material.

Supplementary Cementing Materials may be added as a separate ingredient to the concrete mixer or as a component of a blended cement; a blended cement is a manufactured product consisting of portland cement blended or interground with one or more SCMs.