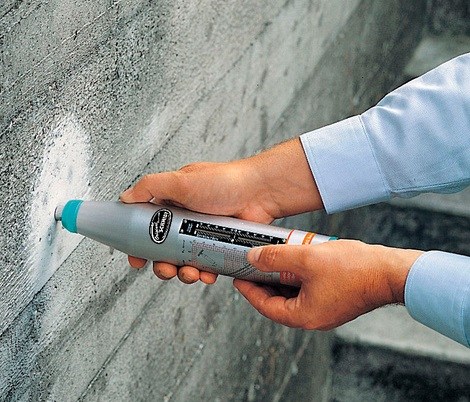 In this article, the Rebound Test (schmidt hammer test) is outlined.

The Swiss engineer Ernst Schmidt, first developed a practicable rebound test hammer in the late 1940s, amd modern versions are based on this. Figure 1 shows the basic features of a typical type N hammer, which weighs less than 2 kg, and has an impact energy of approximately 2.2 Nm.

When the spring-controlled mass rebounds, it takes with it a rider which slides along a scale and is visible through a small window in the side of the casing. The rider can be held in position on the scale by depressing the locking button. The equipment is very simple to use (Figure 2), and may be operated either horizontally or vertically either upwards or downwards.

The plunger is pressed strongly and steadily against the concrete at right angles to its surface, until the spring-loaded mass is triggered from its locked position. After the impact, the scale index is read while the hammer is still in the test position. Alternatively, the locking button may be pressed to enable the reading to be retained, or results can be recorded automatically by an attached paper recorder. The scale reading is known as the rebound number, and is an arbitrary measure since it depends on the energy stored in the given spring and on the mass used. This version of the equipment is most commonly used, and is most suitable for concretes in the 20–60 N/mm2 strength range. Electronic digital reading equipment with automatic data storage and processing facilities is also available (Figure 3). Other specialized versions are available for impact sensitive zones and for mass concrete.