It was estimated that the production of cement which is used for concrete industry increased from about 1.5 billion tons in 1995 to 2.2 billion tons in 2010. The problem is that cement industry is responsible for some of the CO2 emissions as the production of one ton of portland cement emits approximately one ton of CO2 into the atmosphere. Additionally, CO2 gas emissions participates in the global warming and the climate change.

Therefore, efforts were directed to create alternatives for the ordinary portland cement. This includes the application of supplementary cementing materials such as fly ash, silica fume, granulated blast furnace slag, and rice-husk ash.

In the regard of global warming, the geopolymer concrete has a much lower environmental footprint and could significantly reduce the CO2 emission to the atmosphere caused by the cement industry.

In 1988, Davidovits proposed that an alkaline liquid could be used to react with the silicon (Si) and the aluminium (Al) in a source material of geological origin or in by-product materials such as fly ash and rice husk ash to produce binders. He gave the term “Geopolymer” to represent these binders as the chemical reaction that takes place in this case is a polymerization process.

There are two main constituents of geopolymers:

Geopolymer concrete can be manufactured by using:

Unit weight: of the low-calcium fly ash based geopolymer concrete is similar to that of portland cement concrete (varied between 2330 and 2430 kg/m3).

Note: Creep coefficient is defined as the ratio of creep strain to elastic strain.

Low-calcium fly ash based geopolymer concrete has an excellent resistance to sulfate attack. There was no damage to the surface of test specimens after exposure to sodium sulfate solution up to one year.

Geopolymer concrete has been used for construction of pavements, retaining walls, water tanks and precast applications. 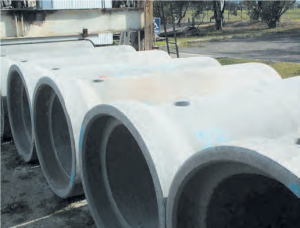 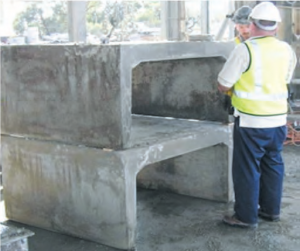