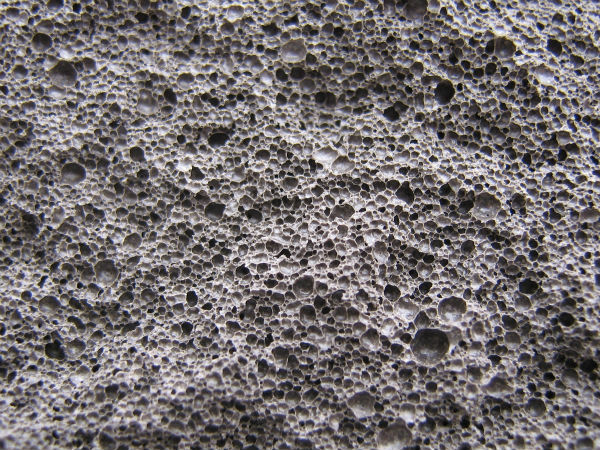 For most common uses, the air content is typically between 40 and 80 per cent of the total volume. The bubbles vary in size from around 0.1 to 1.5 mm in diameter but coalescence might produce voids considerably larger than this, particularly at the top of pours. The typical appearance of foamed concrete can be seen in the previous figure.

Foamed concrete requires no compaction, and will flow readily from a pump outlet to fill restricted and irregular cavities: it can be pumped successfully over significant heights and distances. The 28-day strength and dry density of the material vary according to its composition, largely its air voids content, but usually they range from 1 to 10 N/mm and from 400 to 1600 kg/m3 respectively: lower strengths are associated with lower densities. The most commonly specified strength is 4 N/mm2. (Strengths of up to 40 N/mm2 have been reduced, but so far this has been limited to laboratory-based research work.) The plastic density of the material is about 150 to 200 kg/m3 higher than its dry density.

Ordinary Portland cement (PC), to BS 12: 1996, is normally used as the binder, but other types of cement could be used. Commonly, pulverized-fuel ash (PFA) is used as a partial replacement for PC or as a filler to partially or fully replace sand. A fine sand, such as that conforming to BS 1200:1976, is normally used as bulk filler but sand to BS 882:1992 can also be used. Subject to limitations on grading, waste materials such as granite dust and single-sized tailings can also be used. Small percentages of coarse aggregate, up to 14 mm in  size, can also be added to increase the stiffness of the concrete. Admixtures have been used to increase the rate of strength gain, particularly for highway trench reinstatement.

Foam is produced using specialized equipment, as shown next: