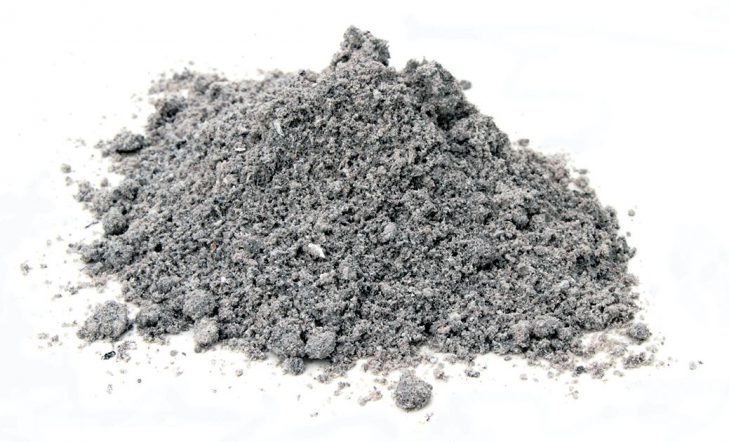 From all supplementary cementitious materials (SCMs), fly ash is in fact the most widely used replacement material in concrete. Fly ash is a byproduct of the  combustion process of pulverized coal in plants generating electrical power. While combustion, the coal’s mineral impurities fuse in suspension and then are removed away from the combustion chamber by the exhaust gases. In the operation, the fused material cools and solidifies into glassy particles called fly ash. The fly ash is then collected from the exhaust gases by electrostatic precipitators or bag filters as a finely divided powder (see previous photo).

Fly ash can be either classified as Type F or Type C. Regarding Type F, it has pozzolanic properties and is normally produced from burning anthracite or bituminous coal. The sum of silicon dioxide (SiO2), aluminum oxide (Al2O3) and iron oxide (Fe2O3) is required to be >= 70% for Type F fly ash.

For Type C fly ash, it possess some cementitious properties in addition to the pozzolanic action. Typically, Type C fly ash is produced from lignite or subbituminous coal. Here, the sum of SiO2,  Al2O3, and Fe2O3 must be >= 50%.

In general, fly ash is utilized in more than 50% of ready mixed concrete productions. Type F  is usually used at dosages of 15% to 25% by mass of cementitious material and Type C is used at ratio of 15% to 40%. This is not always the case as some concretes might designed to have higher contents of fly ash. In this case, the term “High volume fly ash (HVFA) concrete” is given to represent concretes with fly ash at dosages > 40% by mass of cementitious material. Special attention is given to HVFA concretes.

–> Mostly, fly ash particles are [fine solid spheres] although some are [hollow cenospheres] (see next figure). Also present are [plerospheres], which are spherical particles containing smaller spheres. The particle sizes in fly ash vary from less than 1 μm to more than 100 μm with the average particle size measuring less than 20 μm (typically 10 μm). Typically only 10% to 30% of the particles by mass are larger than 45 μm.

–> For fly ash without close compaction, the bulk density (mass per unit volume including air between particles) can vary from 540 kg/m3 to 860 kg/m3, whereas with close packed storage or vibration, the range can be 1120 kg/m3 to 1500 kg/m3.

–> The color is generally gray or tan.

Fly ash is mainly alumino-silicate glass containing silica, alumina, iron, and calcium. Minor components are magnesium, sulfur, sodium, potassium, and carbon. The chemical composition of fly ash depends on the coal source. For instance, hard bituminous or anthracitic coals tend to produce ashes high in silica and alumina but low in calcium (Type F) while fly ashes from softer lignite of subbituminous coals gives higher calcium content (greater than 10% to greater than 30% CaO) and are lower in silica and alumina (Type C).