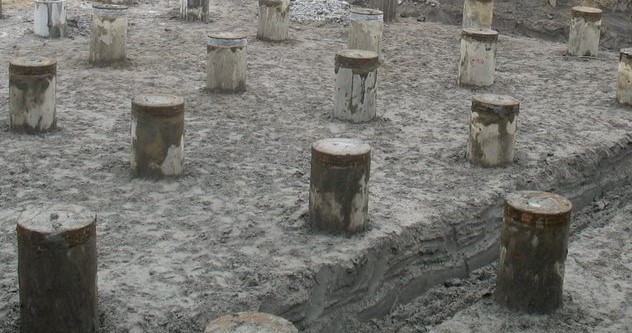 In this article named “Classification of Piles: Load Transmission“, the types of piles according to load transmission and functional behaviour are discussed.

Classification of pile with respect to load transmission and functional behaviour

These piles transfer their load on to a firm stratum located at a considerable depth below the base of the structure and they derive most of their carrying capacity from the penetration resistance of the soil at the toe of the pile (see figure 1). The pile behaves as an ordinary column and should be designed as such. Even in weak soil, a pile will not fail by buckling and this effect needs only be considered if part of the pile is unsupported, i.e. if it is in either air or water. Load is transmitted to the soil through friction or cohesion. But sometimes, the soil surrounding the pile may adhere to the surface of the pile and causes
“Negative Skin Friction” on the pile. This, sometimes has considerable effect on the capacity of the pile. Negative skin friction is caused by the drainage of the ground water and consolidation of the soil. The founding depth of the pile is influenced by the results of the site investigate on and soil test.

These piles transmit most of their load to the soil through skin friction. This process of driving such piles close to each other in groups greatly reduces the porosity and compressibility of the soil within and around the groups. Therefore piles of this category are some times called compaction piles. During the
process of driving the pile into the ground, the soil becomes moulded and, as a  result loses some of its strength. Therefore the pile is not able to transfer the exact amount of load which it is intended to immediately after it has been driven. Usually, the soil regains some of its strength three to five months after it has been driven.

These piles also transfer their load to the ground through skin friction. The process of driving such piles does not compact the soil appreciably. These types of pile foundations are commonly known as floating pile foundations.

An extension of the end bearing pile when the bearing stratum is not hard, such as a firm clay. The pile is driven far enough into the lower material to develop adequate frictional resistance. A farther variation of the end bearing pile is piles with enlarged bearing areas. This is achieved by forcing a bulb of concrete into the soft stratum immediately above the firm layer to give an enlarged base. A similar effect is produced with bored piles by forming a large cone or bell at the bottom with a special reaming tool. Bored piles which are provided with a bell have a high tensile strength and can be used as tension piles (see figure 3)