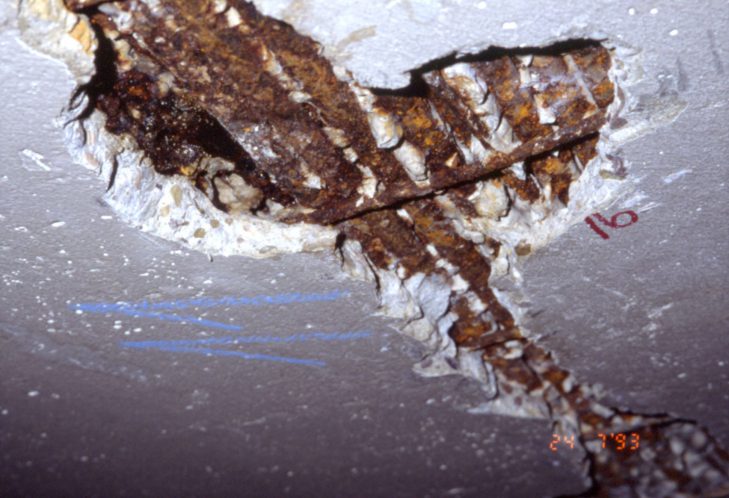 Concrete is an alkaline material, having a pore solution of pH ranging between 12-13. The high alkalinity exists due to hydration of cement releasing sodium hydroxide (NaOH) and potassium hydroxide (KOH) in a saturated calcium hydroxide solution (Ca(OH)2). This alkalinity provides the steel with a high degree of protection against corrosion by forming a passive layer on its surface. This layer is dense and impermeable ferric oxide (Fe2O3) film and, if fully established and maintained, it prevents further corrosion of the steel

However, chlorides can cause corrosion of steel even if high alkalinity is maintained >12. Chloride ions do not directly attack the integrity of concrete causing degradation, but they pass through its pores until reaching the steel surface. Chloride ions then react with the oxide film causing a local breakdown – a pit, hence the name pitting corrosion – within it.

Corrosion is an electrochemical process leads to surface wastage of metals. In order for corrosion to occur, four basic elements are required:
1. Anode – site where corrosion occurs and from which current (electrons) flows.
2. Cathode – site where no corrosion occurs and to which current flows.
3. Electrolyte – a medium capable of conducting electric current by ionic current flow. In the case of concrete, the alkaline pore solution constitutes the electrolyte.
4. Metallic path – connection between the anode and cathode, which allows current return and completes the circuit. Steel serves this purpose in reinforced concrete.

The combination of these four elements forms what is known as “corrosion cell”. A schematic diagram for corrosion cell is shown in the following figure.

Regarding chloride induced corrosion, areas no longer protected by the passive film at the formed pits act as the anode of the corrosion cell, while the cathodic reaction takes place at the still passive areas. The chemical reactions involved are as follows: