The earliest contemporary use of lightweight concrete (LWC) dates all the way back to 1917, when the an American Corporation began constructing ships using this combination owing to its excellent strength and performance. LWC has now become a popular building material for use in the construction of strong load-bearing walls, bridges, and sewage systems. 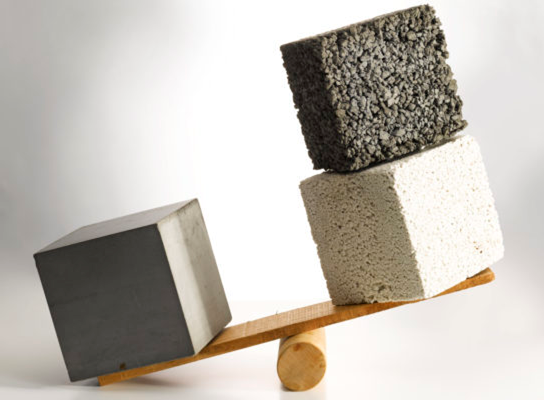 What is concrete that is lightweight?

Nevertheless, lightweight concrete may achieve a compressive strength of 7000 to 10,000 psi. This, however, may degrade the mixture’s density, since it necessitates the inclusion of more pozzolans and water-reducing admixtures to the concrete.

Variations between normal and lightweight concrete

In comparison to conventional concrete, lightweight concrete has a greater proportion of water. Because the use of porous aggregates prolongs the time required for drying, aggregates are pre-soaked in water before being added to the cement.

As previously stated, conventional concrete typically weighs between 140 and 150 pounds per cubic foot owing to the presence of denser particles in their natural form. As a consequence, many think that regular concrete is less expensive than LWC. However, structures constructed using standard concrete need extra material for framing, cladding, and steel reinforcing, raising the total cost. As a result, LWC continues to be an economical building material, particularly for bigger projects.

Use of lightweight concrete in practical applications

The Bank of America Building in Charlotte, North Carolina, is one of the most popular buildings constructed using lightweight concrete. This demonstrates how LWC may be utilized to construct strong buildings, particularly since the potential of dead load transfer between floors is substantially minimized.

Since a result, LWC is excellent for adding flooring to older or even modern buildings, as it lowers the danger of collapse. As such, it is capable of effectively constructing bridges, decks, girders, piers, precast structures, and high-rise buildings with low density. For example, by incorporating LWC into the Wabash River Bridge, builders were able to decrease project density by 17% and save 18% in terms of cost — a staggering $1.7 million.

Because LWC has a low thermal conductivity and a strong resistance to heat, it is currently widely used to insulate water pipelines, walls, and roofs. It protects steel from corrosion by creating a protective coating that also acts as an insulator against rot. Additionally, LWC is often utilized to build interstate and highway lanes without adding dead weight to existing structures.

This kind of lightweight concrete is composed of porous and light materials such as clay, shale, slate, volcanic pumice, ash, or perlite. Additionally, weaker aggregates may be added to the mixture to increase its heat conductivity; however, this will decrease its strength.

The lightweight aggregate is ideal for use with precast concrete blocks or steel reinforcing. Denser variants, on the other hand, exhibit superior bonding properties between steel and concrete, as well as improved protection against steel corrosion.

Due to the huge gaps introduced into the mortar mass or concrete, this kind of lightweight concrete is also called as gaseous concrete or foamed concrete. Typically, vesicles are injected through a chemical reaction or the application of an air entraining agent.

Aerated or foamed concrete is self-compacting, does not need flattening, and provides enough thermal insulation. As a result, it is suitable for usage in difficult-to-reach areas and sewage systems.

This kind of concrete is created by excluding fine particles from the mix, leaving only big voids and coarse aggregates. This is why No-Fines concrete provides superior insulation and has a comparatively low shrinkage during the drying process.

No-Fines concrete is ideal for load-bearing walls and may be used both inside and outdoors. However, owing to its reduced density and cement content, this kind of lightweight concrete should not be utilized in conjunction with reinforced concrete.

The advantages and disadvantages of lightweight concrete

Lightweight concrete is a versatile and readily transportable construction material that needs little reinforcement from steel or extra concrete. This enables it to be cost efficient, particularly for bigger construction projects.

Additionally, LWC is an excellent material for shielding against heat damage owing to its low thermal conductivity and fire resistance.

Despite its lower density, LWC buildings are unlikely to collapse. Indeed, LWC has a lower shrinkage rate than conventional concrete and a higher resilience against rot and termite infestations.

Due to the porous nature of LWC, it is difficult to properly position the combination. Another problem with LWC is that when mixed improperly, the cement tends to separate from the aggregates.

To put it simply:

Lightweight concrete is a cost-effective alternative to conventional concrete, particularly since it maintains the structural integrity of the building. LWC’s greater porosity also affects its thermal conductivity, making it ideal for applications requiring heat damage protection.

Read Also: 8 Easy Tips for your Safety in Construction Site