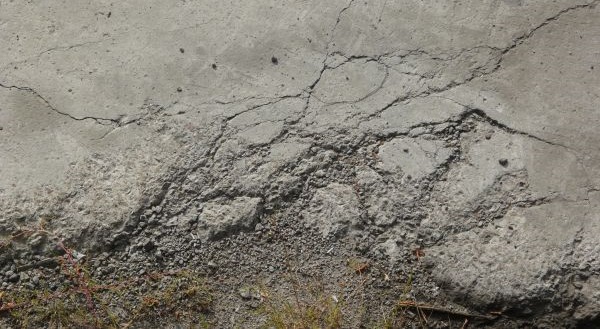 In this article, two of the visual defects that might appear on concrete are discussed: Surface Rust Stains and Efflorescence (or Leaching) of concrete.

Rust stains are caused by corroded steel below the surface which has inadequate cover, or by corroded steel that is fully exposed due to a spall or poor craftsmanship. The process of corrosion of reinforcement yields oxidation products which expand and tend to flake. The expansion of the oxidation products leads to cracking and decreases the bond the concrete originally had with the rebar.

Rust stains are brownish–red in colour and are detected using the visual survey. The identification of rust stains on the surface of a concrete structure is critical because they represent where corroded reinforcement is located below the surface. Ultimately, the process of visually noticing rust staining will save time and money necessary for non–destructive tests to determine the actual location of the corroded steel.

Efflorescence is formed as a result of water finding a way into concrete through cracks or openings at the surface, evaporating, and leaving behind salts and other minerals which were picked up on the way into or through the concrete (i.e. water may pick up contaminants from the soil before it reaches the exterior surface of the concrete).

Efflorescence is detected by a visual survey and is a non–structural defect. It is located at the surface of concrete structure along cracks and is known for its white essence. The amount of efflorescence present will distinguish how much water is entering the concrete structure. For this reason, it is important to record and include this defect in the visual survey.

In the same manner as the rust stain visual survey, the visual detection of efflorescence helps Engineers with discoveries beyond the surface. In this case, the discovery of a great deal of efflorescence could mean that the concrete is very susceptible to freeze-thaw cycles. Since there are plenty of remnants present from seepage through the concrete, it means that water can easily access the concrete and thus it is easily saturated and subject to freeze–thaw situations.